BFCtv, sponsored by Skillcrown, brings you goals from a selection of Academy fixtures from yesterday’s round of games. A full round-up of this week’s results can be seen below.

Last Friday 11th October the BFCA National League U17s were in ESFA Super League Cup action and faced an away trip to SEEVIC. The Ravens battled out a 1-1 draw earning a point in the group phase.

The U17s were then away to Norwich on Wednesday and fell to a 4-2 loss in the National U19 Alliance League.

The BCFA ECFA Development Squad A were away to Pro Direct Enfield and fell to a narrow 1-0 loss in the Association of Colleges/ECFA Cup.

The BCFA ECFA Development Squad C also had a AoC/ECFA Cup tie on Wednesday taking on Leyton Orient in Waltham Forest and were beaten 2-1 on the afternoon.

TRS Year 13 Development B were in Kent Schools FA Academy Championship action taking on nearby Ravens Wood. And the A-Level squad came out with an impressive 11-1 win at home.

The Girls Academy were at home on Wednesday taking on APD and fell to an unfortunate 5-0 loss.

The TRS A-Level Elite hosted Beths Grammar School at Hayes Lane and battled out a 2-2 draw.

As well as those, the young Ravens are in FA Youth Cup action tomorrow night away at Aveley! For more details click HERE.

The Academy Team of the Week can be viewed below! 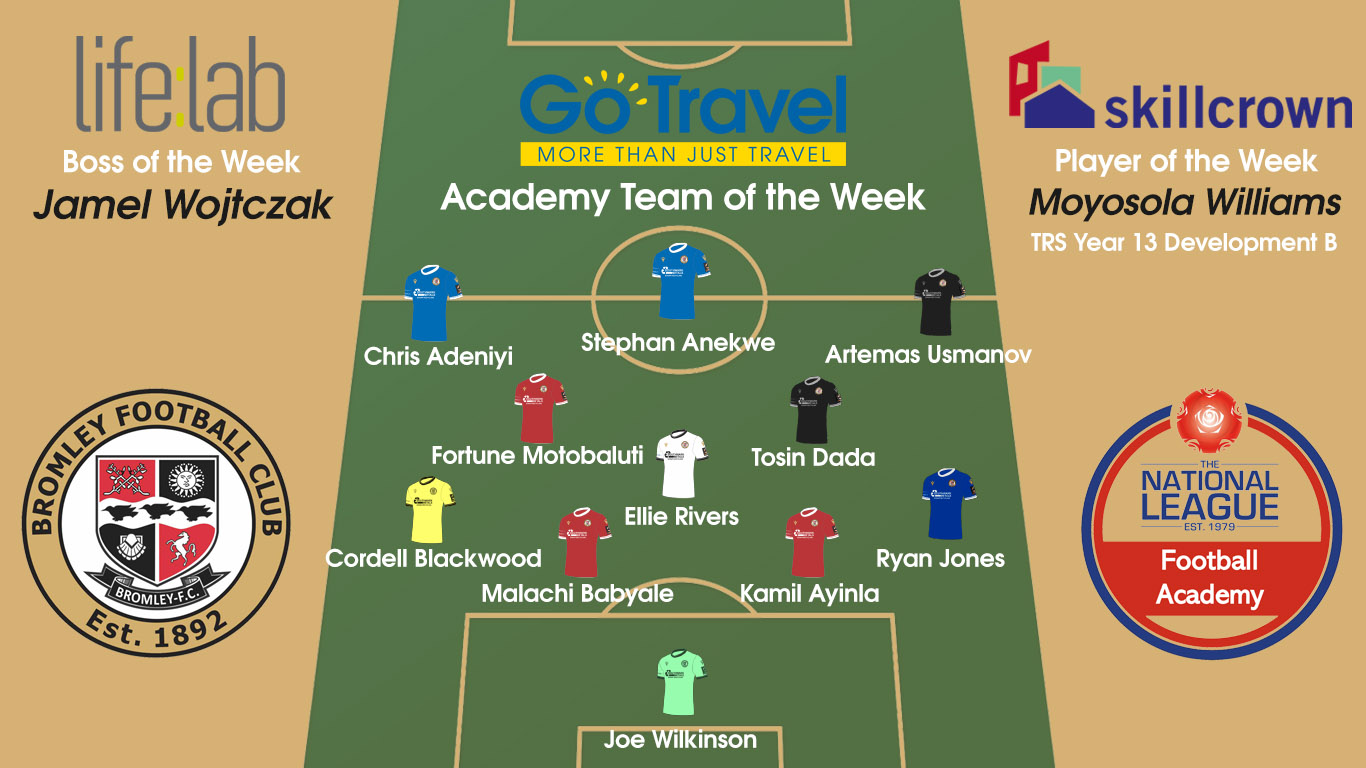 Congratulations to those in the team this week! #WeAreBromley

BFCA National League U17s progressed in the National League U19 Alliance Cup on Wednesday 9th October. They faced a tough trip to Welling United and came away with a 1-0 win. A penalty scored by Dylan Pratt was enough for the 1st Years who now progress into the next round of the cup.

BFCA TRS Year 13 Development A Squad beat Ravens Wood away 3-1 having been 1-0 down at half-time. Goals from captain Harry Pointing (featuring at the end of the highlights above), Nadeer Zeddini and Kobi Bowers sealed the win.

BFCA ECFA Development Squad A were victorious at home, winning 3-0 against Pro Direct. A brace from Sami Hamache was added to by Andreas Aranganathan to round off the 3-0 win.

BFCA ECFA Development Squad B beat Boreham Wood in a thrilling game that ended in a 4-3 win. A hat-trick from Kemal Tur and a goal from Ronnie Spinks secured the win on the Stadium pitch at Hayes Lane.

TRS A-Level Development were also in KSFA North Kent League action, picking up a 3-3 draw away at Langley Park.