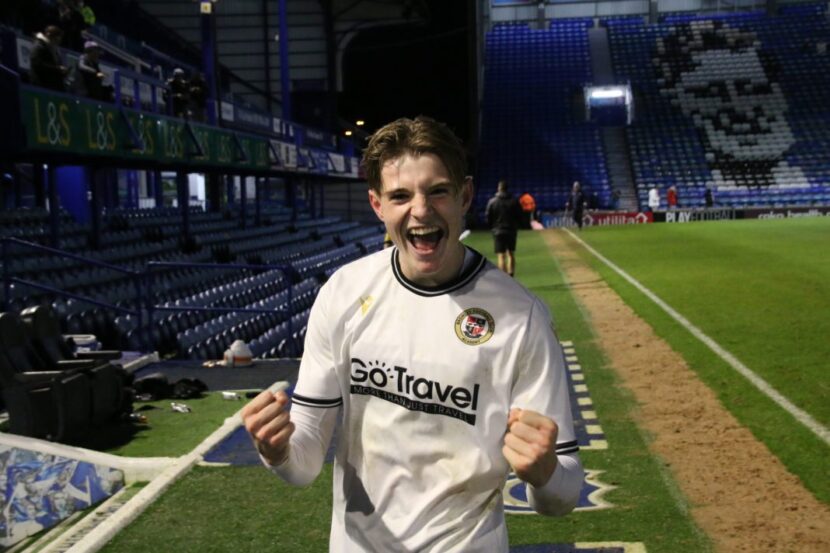 Liam Vincent was handed his National League debut by Neil Smith on Tuesday night. A debut which has been almost five years in the making.

The 17 year old Academy scholar has been associated with the Ravens since joining the Youth section at U14s level. Over the years Liam has gone on to represent the Club at Youth Academy level before joining the Academy programme in 2019. Ahead of this season he signed first-team forms, earning his place as a first year pro amongst Neil Smith’s squad.

Being a self-confessed supporter of the Club, the ambition has always been there to make first-team appearances as Vincent explains;

“Joining the Club from such a young age, and being a Bromley boy myself, the aim was always to reach the first-team here especially it being my boyhood club that I have come to support for years now.”

Tuesday night’s appearance now follows on from his first-team debut in the FA Trophy tie against Hemel Hempstead Town in December. But it was the League debut that the promising full back had his eyes set on, as Liam commented;

“Making my debut in the League did feel different last night (Tuesday 9th), because it has been my aim this season to feature in the National League and last night doing that was special. It’s something I’ve been working towards not only this year but coming up through the youth teams and u23s. Last night it was brilliant and I certainly won’t forget it.”

Liam has been in the extremely fortunate position this season being able to ply his trade across three levels of the Bromley Football Club pathway. As well as being a part of Neil Smith’s first-team squad, he has also featured for Roger Johnson’s U23s. But, first and foremost, Liam is a second year Academy scholar. And it is with his Academy team mates that he has achieved major successes this season.

The Club were delighted to be able to follow the incredible journey that our FA Youth Cup squad went on in 2020, led by Jamel Wojtczak, Steve Aris and Tom Beamount. The Academy scholars won four ties to make history and reach the 3rd Round, the furthest the Club have ever been in the competition.

Vincent featured in every round and scored in three of the five cup ties. Most notably getting his side on level terms against Portsmouth, before sending in the corner, that Ben Krauhaus would score from, to earn the 2-1 win in the 2nd Round at Fratton Park.

Speaking about the Youth Cup successes alongside his first-team debuts, Vincent expressed his delight on both of them;

“The FA Youth Cup run we had was so memorable and getting that far was special for everyone at the Club. Making my League debut was special on a personal level as representing the club I’ve watched develop for years is incredible.”

The highs and lows of a cup run bring with it lasting memories and for Vincent it was made even sweeter sharing moments, like that historic win at Fratton Park, with his fellow Academy scholars. On that famous win Vincent said;

“The FA Youth Cup was great and something that won’t ever leave me, getting that far with many long-term mates was brilliant and being able to go to a Football League club like Portsmouth and beat them was unbelievable!“

For Liam, much like every other young person during the pandemic, the past year has had a major effect on school life. Vincent is in his final year at the Academy and undertaking his studies at The Ravensbourne School. On top of that Liam has been brought into a full-time, professional football environment providing him a unique opportunity. But such opportunities always come offer up challenges, with Vincent having to be proactive in his time management. Challenges he says have proved difficult but worthwhile all the same;

“Keeping up with school has been difficult especially at the moment with online lessons overlapping with training but it just means I have to set aside time out of school hours to complete it. Alongside with the football there has been some points where it has been tough, but being able to play and train through this difficult time is lucky in itself so I can’t complain.”

Plenty of young aspiring footballers in Bromley will be looking up to Liam now as further evidence of the pathway from Youth and Academy football through to the first-team at Bromley Football Club.

Liam is an individual who would gladly offer support or advice to any of those aspiring footballers. When asked how to be committed to both football and education he responded;

“What I would say to upcoming players is that regardless of what you are told never give up, and continue to work hard because opportunities will begin to appear. That’s something I have learnt through the past few years because you will fail countless times but it’s all part of building you as a player.”

Liam is embarking on an exciting career and Tuesday’s debut in the Vanarama National League is another major marker in his development. Vincent knows it is all about taking the next step and setting new targets, as well as continuing with his studies at The Ravensbourne School. The 17 year old has been quick to set sight on his next aim;

“My target is to be able to make my full League debut this season and hopefully, with time, I can push my way to becoming a regular in the first team.“