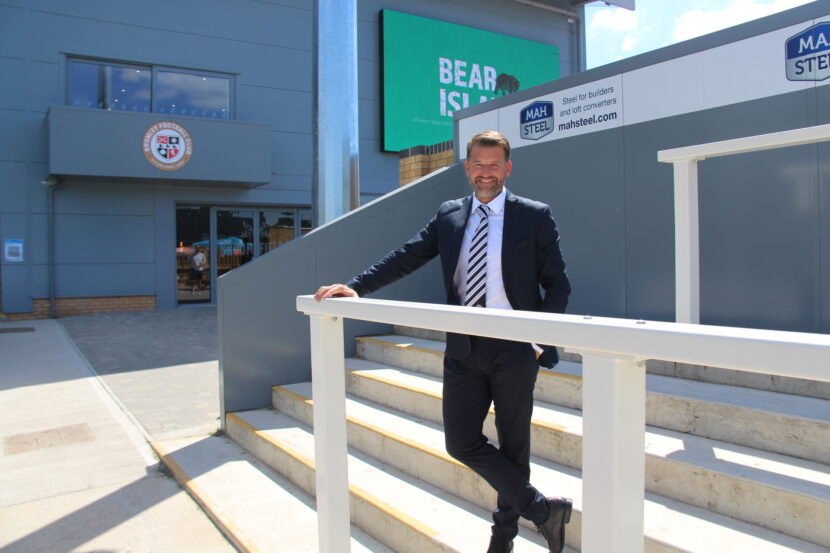 Bromley Football Club are delighted to announce that Mark Hammond has been promoted to Chief Executive Officer.

Mark originally joined the club back in 2013 when he was appointed as First Team coach and played an instrumental role in elevating the club to our first-ever season in the National League following two successful seasons reaching the 2013-14 National League play-offs and winning promotion in 2014-15.

During the 2015-16 off-season, Hammond was approached by the Board of Directors to launch and build an academy at Hayes Lane. Hammond seized the challenge with an astonishing sense of purpose, quickly winning the trust of the Board and staff alike.

During the 2015-16 season, Hammond was appointed as Academy Director and Assistant Manager where he was influential in supporting Neil Smith’s reign, establishing the club in the National League, spanning over five years. This culminated in 260 games, 40%-win, 35% loss and 25% draw, 100% live TV win record and FA Trophy Finalists and pivotal in player and staff recruitment.

However, Mark’s main focus during this period was the development and growth of the academy player, staff and business model. Hammond has taken the Post 16-19 boys Academy from 40 players to over 300 players. Mark has built a boy’s youth development academy from u12s to u16s, established a men’s u23 development pathway programme and launched the girls and women’s strategy which sees over 60 girls represent Bromley FC at elite level.

Through his tireless efforts in pursuing the growth of the academy, Mark has established positive and successful educational partnerships with The Ravensbourne School and London South-East Colleges. All Players at post 16 level can study several qualifications such as BTEC, A-Levels and foundation degrees, whilst being full-time at the Club where they can become “professionals in football” not just professional footballers. Furthermore, the academy now boasts healthy data assessment statistics and caters for players not only in Bromley but neighbouring boroughs such as Croydon, Lewisham and Southwark. The Academy have now proudly produced an alumnus of players who have moved onto a number of national universities, careers in the world of sports science, gained full time US scholarships and most notably are now employed through the club’s apprenticeship scheme.

Since 2015-16, the staff structure has grown from four full-time staff to 21 full-time employees with a further 14 part-time staff members. Mark has designed and implemented a playing and coaching philosophy, an age-appropriate games competition programme and most recently built and collated a sports science periodisation model. As a result of this, the club have seen the development of home-grown talent either being sold to the EFL or represent our First Team squad at National League level.

Speaking about his appointment, Mark said:

“It is a real privilege to be appointed CEO of this fantastic football club at such an exciting time of our journey. I have worked at the football club for a number of years and even played for the club, so I am incredibly proud of what we have achieved and the team we have built within our infrastructure. I’m looking forward to using all my experience to help push the football club further.”

“We have a driven and ambitious team both on and off the pitch and we are all focused on helping the football club to be successful. That success includes winning matches of course but we have wider objectives to provide educational and recreational football opportunities for young people, develop our women and girls provision, expand upon the incredible work our Community Trust does and much, much more.”

“I am still very much a student of the game, keen and wanting to learn and improve. Supporters probably won’t know but I’m continuing my studies through the Sports Directorship Master qualification with VSI Education. This is a really challenging and thought provoking course which will really help enhance what I plan to deliver as CEO.”

“There is no better time to be involved with Bromley Football Club, so it is a true honour to lead the club in this new role.”

“Mark has played an influential role in the club’s success in recent years. His experience and understanding of the ever-evolving demands of operating a football club will serve perfectly in this new role. Mark’s passion and pride about Bromley FC is infectious and I am confident we will see success continue with Mark now in place as CEO.”

“Following the incredible success of our FA Trophy Final, we have used the summer to reflect and re-structure some of our off the pitch operations. Mark’s appointment is the first in a number of exciting appointments we have made which supporters will find out more about in due course.”