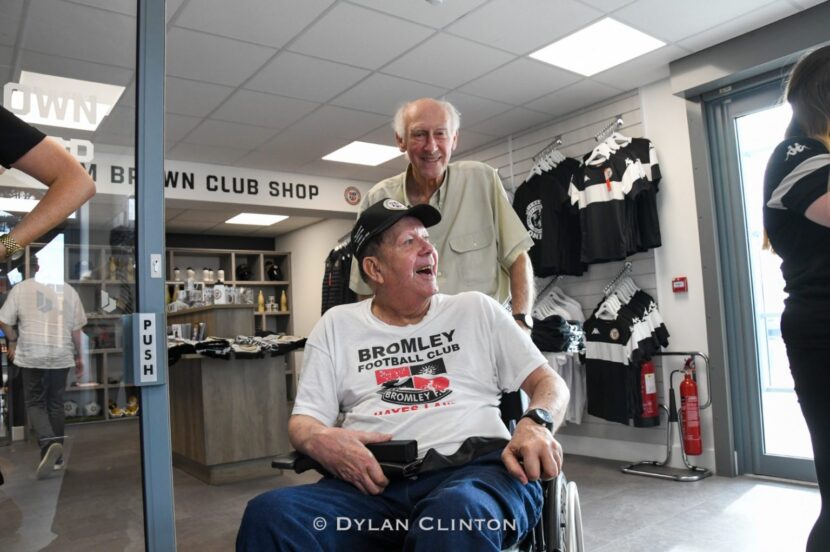 On Monday 11 July, Bromley FC supporters headed to Hayes Lane for the official opening of the Jim Brown Club shop.

Ravens fans were joined by Chairman Robin Stanton-Gleaves, Manager Andy Woodman, Club Captain Byron Webster and first team players Marcus Sablier, James Vennings and Harry Forster to celebrate and recognise the contribution Jim has made to the football club before officially cutting the ribbon and opening the club’s brand-new shop.

Jim was the first to take a look around the shop named in his honour before supporters were given an update regarding playing kit for the 2022/23 season and able to hear from the players about how pre-season preparations have been going.

Our Kappa home and away kits were unveiled before the club announced the winner of our recent third kit competition.

After 80 submissions were whittled down to a final shortlist of six, just shy of 500 supporters voted overwhelmingly for the below design.

Created by Bromley season ticket holder Marc, the design is inspired by the Borough of Bromley and famous stars from our area including David Bowie. Catch our interview with Mark, who goes into more detail about his winning kit, later this week.

Bromley Chairman, Robin Stanton-Gleaves also provided supporters with an update on when the team’s first kit would be available to purchase. Due to fundamental errors on the part of Kappa, the kit which was due to be available to buy at the event, having been ordered in May, was not delivered. Kappa, who did a fantastic job with our historic FA Trophy kit, are urgently working on delivery timescales and we will update supporters as soon as we receive this information.

In the meantime, the club is taking pre-orders for the kits both online and via the Jim Brown Club shop. Supporters will be able to what the kit looks like in person ahead of kick-off against Dartford by popping into the Jim Brown Club Shop.

In the meantime, visitors to Hayes Lane are invited to pop down, browse and purchase from a whole range of Kappa and leisurewear items from the Jim Brown Club Shop which is open at the following times:

You can also visit the club’s online shop by heading to https://bromleyfcshop.co.uk/