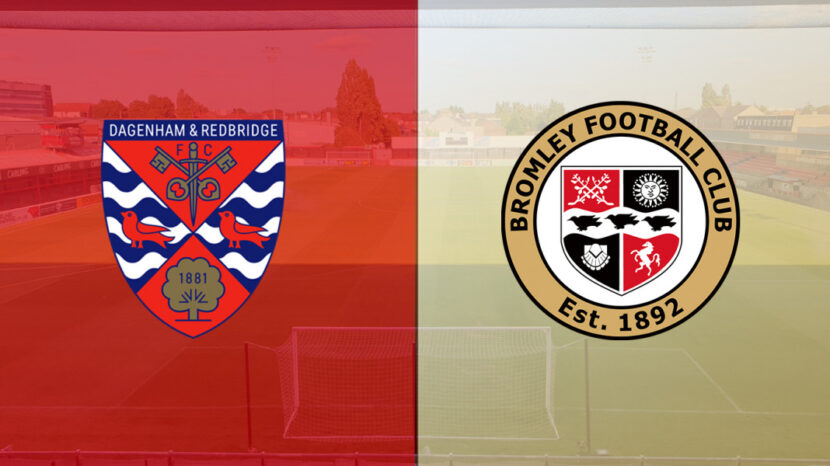 The Ravens make a delayed start to their 2021-22 Vanarama National League campaign with a short trip to Essex to take on Dagenham & Redbridge.

Dagenham’s season began last Saturday and they couldn’t have wished for a better start to the new campaign.

A trip to Stockport County was always going to be a tough test and it looked all the more likely that it would be when the hosts took the lead on 10 minutes through John Rooney.

However, five minutes before half-time, the Daggers equalised courtesy of Will Wright.

The game was completely turned on its head in the second half though as Josh Walker and Matt Robinson both found the net within three minutes of each other to seal a 3-1 win.

As for the Ravens, their season opener with Grimsby Town was postponed.

Dagenham & Redbridge, who were formed in 1992, currently sit third in the league after matchday one as they aim to return to the Football League.

The Daggers finished last season in 12th, their fifth consecutive campaign in the fifth tier since dropping out of the EFL in 2016.

Despite only forming 29 years ago, the Essex side have already reached the heights of League One Football, gaining promotion from the fourth tier back in 2010.

Last season saw Dagenham pick up 33 points on home soil and will go into tomorrow’s game high in confidence after failing to lose any of their previous five home meetings with Bromley.

The Ravens will be travelling to a ground which first played host to football in 1917 and has a capacity of 6,078.

Daryl McMahon took the reins at Dagenham in January 2020 and guided his side to a 12th placed finish in his first full season in charge last campaign.

The Daggers boss started his managerial career at Ebbsfleet United where he went on to win the 2016-17 National League South play-offs.

His success at the Fleet awarded him with a move to League Two side Macclesfield Town, but he soon arrived in Essex after a short spell with the Silkmen.

As a player, McMahon won promotion to League One in 2006 with Leyton Orient, before picking up an FA Trophy winners’ medal the following season with Stevenage.

In a playing career which started in the youth set-up at West Ham United, the Daggers boss also played for Farnborough, Eastleigh, Dover Athletic and Ebbsfleet United.

McMahon, who also represented Republic of Ireland at U16, U17 and U18 level, hung up his boots in 2015 whilst at Boreham Wood.

The last time these two sides met, Bromley came out on top, clinching a 1-0 win at Hayes Lane back in April.

Michael Cheek bagged the only goal of the game against his former club just past the half-hour mark to seal all three points for the Ravens.

However, our last trip to Victoria Road proved to be a different story with the same score-line.

Liam Gordon’s 25th minute goal proved to be the difference between the two sides as the Daggers secured a 1-0 win back in February.

There will be a few faces in the Bromley camp taking in familiar surroundings on Saturday, with six Ravens coming up against their former side.

Goalkeeper Mark Cousins made over 100 appearances for the Daggers, keeping a total of 31 clean sheets during a four-year spell with the club.

One of Cousins’ team-mates during his time at Victoria Road was Michael Cheek, who joined Dagenham in 2017 and went on to score 13 in 34 games for his former side.

Billy Bingham will also come up against his former employers after spending over six years at the club. He was also part of their League Two promotion squad of 2010 and went on to make over 100 appearances for the Daggers.

Corey Whitely and Louis Dennis are both set to be involved on their return debuts for Bromley and the pair are also former Daggers players. The latter began his career at Victoria Road before leaving for Bromley in 2014. As for Whitely, he racked up a goal tally of 24 in 68 appearances during a one-and-a-half year spell with the Essex side.

Fellow summer recruit Toby Stevenson is also set to come up against his former club after spending a short period of the 2019-20 season on loan at the Daggers from Charlton, where he featured against Bromley.

Read our Away Day Guide:

All of the ticket and travel details can be found within our Away Day Guide. CLICK HERE TO READ!