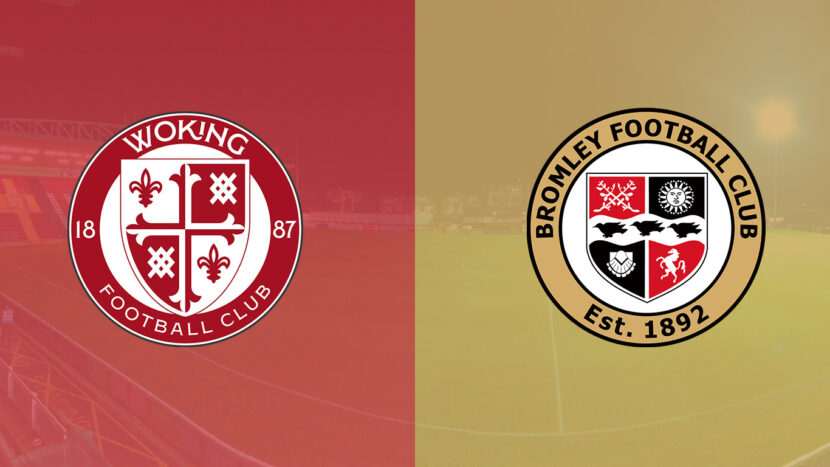 The Ravens will be making the trip to the Kingfield Stadium tonight, as they look to extend their fantastic run of form, remaining unbeaten in nine matches in all competition.

On Saturday, Bromley played host to FC Halifax Town in what was a very well contested match, neither side could find a breakthrough and it ended 0-0.

There were plenty of chances for The Ravens through the likes of Harry Forster and Luke Coulson, who’s first-half volley stung the gloves of The Shaymen ‘keeper Sam Johnson.

However, Bromley’s best chance of the game came when the home side were awarded a penalty with 20 minutes to goal from a handball, but uncharacteristically, Michael Cheek missed from the spot, and the game was a stalemate.

Woking FC were established in 1887, and are nicknamed The Cardinals, or The Cards.

Bromley’s opposition currently sit 11th in the National League and have a very even record, winning six and losing six this season.

The Cardinals come into the game against The Ravens in great spirits, after beating Altrincham 3-2 in what was a thrilling game at the Kingfield Stadium on Saturday afternoon.

Max Kretzschmar, Inih Effiong and Tahvon Campbell were all on the scoresheet in the last game, and they are all of Woking’s top scorers this season, with Campbell at the top of the ranks with nine goals, and Kretzschmar and Effiong sitting in 2nd with four.

The man in charge of Woking is Alan Dowson, who has been at The Cards since 2018.

Dowson started his footballing career as a player, coming through the youth set up at Millwall, but only making one appearance for The Lions, as well as spending a month on loan at Fulham in 1990.

After his departure from Millwall, he joined Bradford, and then spent a year at Darlington, before dropping into Non-League Football, playing for Slough Town and Gateshead and then joining Walton & Hersham in 1996, where he ended up spending 10 years of his career there.

He was made player-manager in 2004, which is where his managerial career started. He left in 2007 for Kingstonian, where he spent seven years, winning the Isthmian Division One South in his second season at the club.

In 2018, Dowson left Kingstonian to join Woking, where he has been ever since, and managing the club 92 times.

Dowson brought his backroom staff with him from Kingstonian to Woking, which included Sky Sports commentator, Martin Tyler, who is now assistant manager of The Cards.

Early on in Andy Woodman’s reign as Bromley boss, he took his side to the Kingfield Stadium and ran out winners in a seven-goal-thriller, beating Woking 4-3.

Jack Bridge opened the scoring for Bromley after just three minutes, in what was the perfect start for The Ravens.

Moussa Diarra equalised for The Cards just before the 20 minute mark, and it didn’t take long for Woking to put themselves 2-1 up, when just a few minutes later Jack Cook found the net, and Bromley went into the break a goal down.

The second period started surprisingly slow after what was an eventful first-half, but with just 11 minutes left to play, Michael Cheek found the net, with a well placed finish on his weaker side.

Despite the goal, Bromley’s woes continued as just two minutes after Cheek’s leveller, Sam Dalby netted for Woking, after a rebound following a Mark Cousins save.

The Cards would’ve wanted to shut up shop at this point, but this was not the case. Two minutes after Dalby’s goal, Bromley second half substitute, James Alabi, picked up the ball and rifled an effort right in the top corner, levelling for Bromley once more.

After seeing three goals in four minutes, the game seemed relatively calm after Bromley’s equaliser, but there was still more drama to be had.

Liam Vincent found himself free on the left hand side of the pitch, and fizzed a cross into the box, which was well saved by Craig Ross, but Jack Cook turned to first-half hero, to second-half zero, when the save ricocheted off of his foot and into the back of his own goal, gifting Bromley all three points.

Bromley defender, Chris Bush, spent a short time on loan at Woking in 2010, playing four games for the club, he’ll be a familiar face of those Cards fans with a fantastic memory.