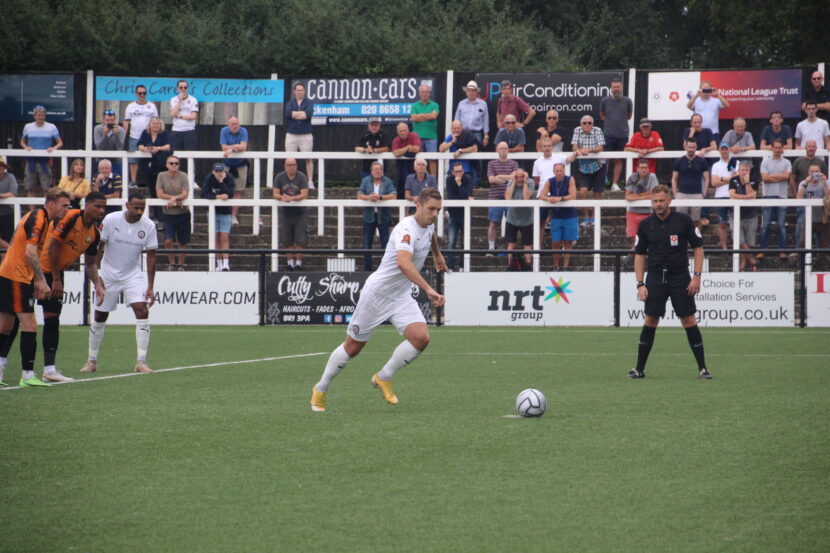 Bromley returned to winning ways after they defeated visitors Barnet 2-0 at Hayes Lane.

After a quiet opening few minutes, Michael Cheek brilliantly intercepted a cross and saw his lobbed effort go over the bar. Minutes later, it was the visitors’ turn to test the defence. Mason Bloomfield’s long range effort was well saved by Mark Cousins, who dived to his left to tip the ball wide.

Bromley kept attacking and finally their efforts paid off. Sam Beard pushed Cheek inside the penalty area and a spot kick was awarded to the hosts. Cheek made no mistake, sending his penalty hard and low to Sam Sargeant’s right side to give the Ravens the lead.

Bromley had momentum and nearly scored a second goal through Harry Forster. After a brave header from Byron Webster, the ball fell to the winger, whose volley was just wide of the goal. The Bees did have a couple of moments that caused concern for the Bromley defence. Firstly, Kian Flanagan got past his marker and his shot nestled just wide. Then a dangerous cross from Beard was palmed away by Cousins, who got in front of Adam Marriott.

In the second half, Barnet started with intent. David Sesay was going to be through on goal but Chris Bush came to Bromley’s rescue by making a vital interception, a critical challenge from the defender.

It was to prove to be a great start to the half for Bush as he later on doubled Bromley’s lead. A fantastic corner from Jude Arthurs found the defender at the back post, who headed the ball into the back of Sargeant’s net.

As the game was coming to an end, Bush found Cheek with an exquisite long ball. The forward, from a tight angle, forced a save from Sargeant, with the ball then rebounding to Corey Whitely whose curling effort went narrowly wide. James Alabi also nearly got a goal for Bromley, when he saw his shot saved at point blank range from the opposition keeper.

Deep into added time, Cheek almost grabbed another, as he hooked onto a long ball forward from Whitely and got the better of Ben Richards-Everton, but his initial shot was saved well by Sargeant, with Billy Bingham unable to hit the target with the rebound from close range.

Overall, a comfortable win for Bromley who take on Dover Athletic next weekend.