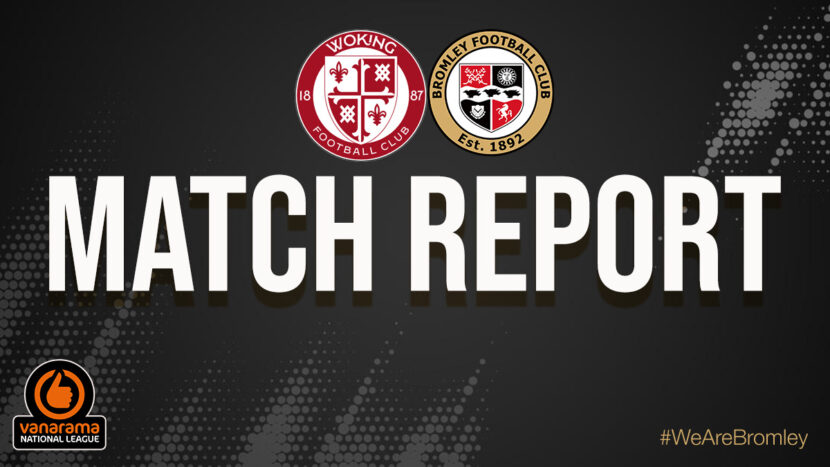 Bromley were triumphant over Woking last night at the Kingsfield Stadium, winning 2-0, however, it wasn’t all plain sailing for either side.

It was a very stop-start first half, with Woking having most of the pressure, until bizarrely, one of the floodlights at the Kingfield Stadium went out.

Referee Scott Tallis called the players back into the dressing room after a few minutes of deliberation.

The players came back out to play the rest of the first period, until about five minutes after play carried on, the same floodlight blew yet again.

Luckily, Woking managed to fix the floodlight issue and the rest of the first-half was played.

George Alexander, Billy Bingham and James Alabi all had the pick of the chances in the first period, as they looked to brighten up the game for The Ravens.

Tahvon Campbell was electric for Woking in the first 45, with his best chance coming just after the half an hour mark, but he didn’t test Mark Cousins and hit the side netting.

Alexander continued to shine for Bromley, getting in behind The Cards’ back line multiple times, finding Harry Forster on one occasion, but the latter couldn’t find the net.

After a well contested second half, Alabi’s eyes lit up when he contested the ball well on the wing and got past the Woking defence, finding Alexander in the box who slotted home for the Ravens after 77 minutes.

Jack Cawley made his debut for Bromley, coming on from the bench in the second-half, and he crowned his debut off with a lovely volley, following a delightful cross from Chris Bush with just five minutes left.

Despite Bromley’s two-goal cushion, Woking still piled on the pressure, forcing Cousins into some great saves to preserve the clean sheet.

The Ravens ended the game as 2-0 winners, extending their unbeaten run to 10, going up to fourth in the National League.