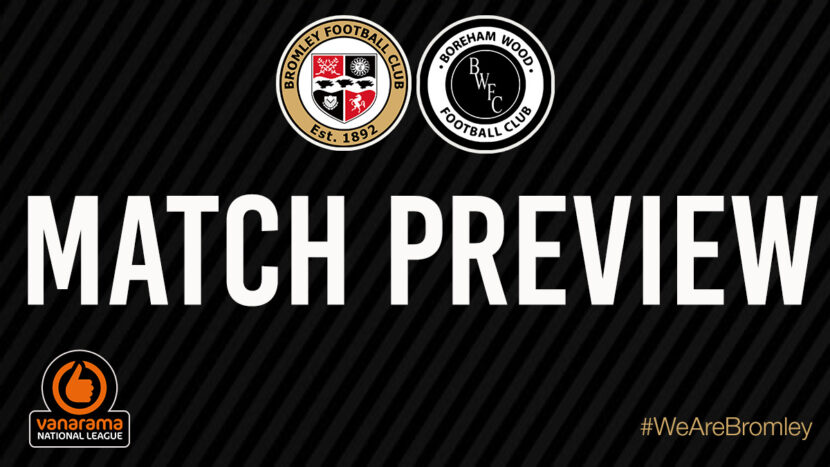 The Ravens return to home soil this weekend as they welcome Boreham Wood to Hayes Lane, hoping to return to winning ways following Saturday’s draw at Chesterfield.

Bromley travelled to Derbyshire to take on Chesterfield in their last fixture and drew 2-2 in dramatic fashion.

Michael Cheek opened the scoring for the visitors on 36 minutes from the penalty spot before George Carline equalised shortly after with a stunning strike.

Manny Oyeleke turned the game on its head before Bromley’s number nine was at it again, poking home deep into stoppage time.

As for Boreham Wood, they maintained their unbeaten start to the season with a 0-0 draw at home to Stockport County.

Boreham Wood will be hoping for a positive season this campaign and go into this weekend’s game unbeaten with three wins and one draw to their name.

Their recent performances put them third, with only goal difference separating them from top spot.

The Wood, who have never featured in the EFL, reached the National League play-off final during the 2017-18 season and will be hoping for a similar outcome this time around.

This weekend’s opposition have only netted four times so far this season, but go into the game as the only side in the division yet to concede.

Luke Garrard took charge of Boreham Wood back in 2015 after making over 150 appearances for the club during his playing career. His appointment made him the youngest boss in all of England’s top five divisions.

During his managerial spell with the Wood, Garrard guided them to the 2017-18 National League play-off final and the club’s first Wembley appearance in their history. History almost repeated itself two seasons later with the Wood losing out on the play-off final to eventual victors Harrogate Town at the semi-final stage.

In a Boreham Wood playing career which stemmed over two separate spells at the club, Garrard also took on the role of Academy Coach in 2008 before becoming Academy Director in 2012. A role as Assistant Manager followed in 2013 which led to him eventually hanging up his boots and taking the reins at the club.

Alongside his current role at Meadow Park, Garrard also maintains his Academy duties as the Academy Manager.

The 35-year-old also made over 100 appearances for AFC Wimbledon and was part of the Conference South winning side of 2009.

Both of last season’s meetings between Bromley and Boreham Wood ended in a 1-1 scoreline. The pair first went head-to-head in November with Sorba Thomas opening the scoring at Hayes Lane before Cheek equalised on the stroke of half-time. It was a similar story at Meadow Park three months later, this time it was Tyrone Marsh who gave the Wood the lead with Courtney Duffus bagging the leveller on 55 minutes.

Our last victory over this weekend’s opposition came in August 2019, a 1-0 win at Hayes Lane courtesy of a Cheek winner.

In our previous 10 meetings with the Wood at Hayes Lane, Bromley have won six and drawn twice.

Adrian Clifton, a recent signing at Boreham Wood, spent the 2019-20 season at Hayes Lane, making 25 appearances for the club.

Frankie Raymond, a popular figure during his time with Bromley, joined the Ravens in 2017 before going on to make over 150 league appearances for the club, netting nine times.

Josh Rees enjoyed two spells at Bromley, initially arriving at Hayes Lane in 2017 and made an instant impact, bagging 20 goals in his first season at the club. His form at Bromley was rewarded with a move to EFL outfit Gillingham before he returned to the club in 2019.

Goalkeeper Reice Charles-Cook is also a former Wood player, joining on a short-term deal, but didn’t make any appearances for the club.