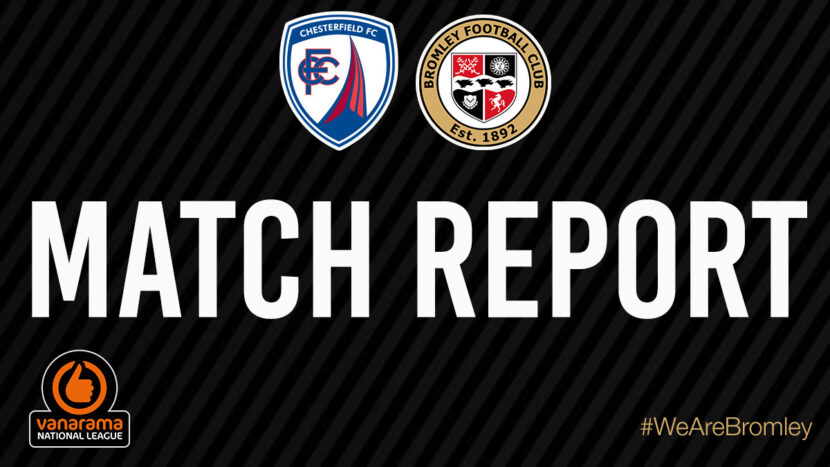 Michael Cheek netted a brace, including a goal right at the end, to secure a point for Bromley as they drew 2-2 away at Chesterfield.

George Carline and Manny Oyeleke netted for the hosts, but it wasn’t enough to secure the points for a side who went into the game without conceding so far this season.

With five minutes on the clock, Bromley had the chance to put their noses in front as Corey Whitely stepped up to take a dangerous free-kick from outside the box. The Ravens’ number 18 then dipped an effort just over Scott Loach’s bar.

Up the other end and Chesterfield thought they should have had a penalty when Jack Clarke hit the deck when racing Mark Cousins to the ball. However, the referee went to his pocket and handed the Spireites man a yellow card for diving.

Chesterfield continued their attacking threat and could have taken the lead on 20 minutes in some style. Saidou Khan unleashed a rocket of a strike from distance, but his effort could only rustle the side-netting.

Moments later, Mark Cousins was forced into a fantastic save to keep out George Carline’s close-ranged header following a Calvin Miller cross.

It was then Bromley’s turn to try and break the dead-lock on the half-hour mark when Jude Arthurs whipped in a corner. The midfielder’s delivery found Omar Sowunmi in the box, but the defender’s downward header was cleared off the line by a blue shirt.

Cheek then tried his luck from just outside the box, drilling a low effort which forced Loach into a save.

The Bromley number nine did eventually write his name on the score-sheet though, giving the Ravens the lead from the penalty spot on 35 minutes after Whitely was brought down.

However, the advantage didn’t last long as Carline rustled the top corner of Bromley’s net just moments after play restarted, levelling proceedings going into the break.

Chesterfield could have taken the lead early into the second half when summer recruit Kabongo Tshimanga was played through on goal. The former Boreham Wood forward struck from close range, forcing Cousins into a fantastic save to keep the scores level.

On the hour mark, half-time substitute Louis Dennis floated in a brilliant free-kick, finding the head of Joe Partington. However, the Bromley number two’s looping header bounced back off the bar.

The hosts then turned the game on its head when Oyeleke slotted into the bottom right corner on 72 minutes to give the Spireites the lead.

However, right at the end, Cheek secured the point for Bromley, slotting in a Harry Forster cross deep into stoppage time.

The Ravens are back in action next weekend, playing host to Boreham Wood at Hayes Lane on Saturday.