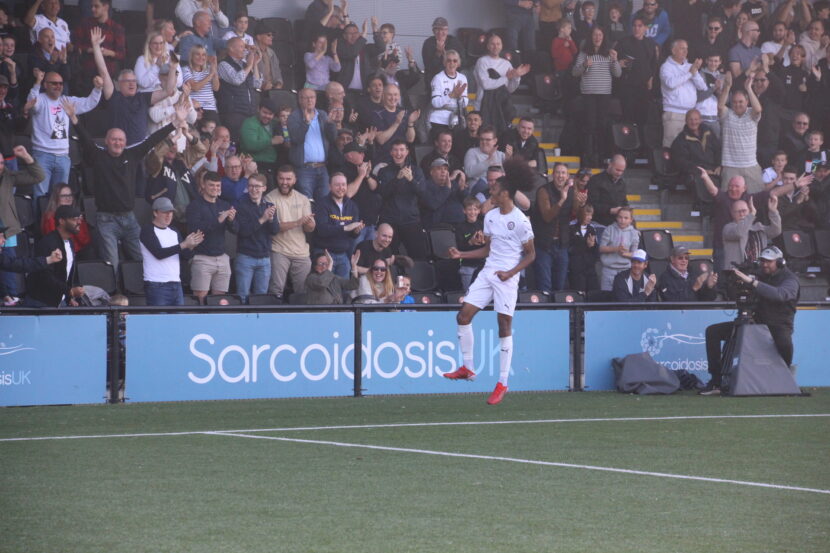 Marcus Sablier, the Bromley academy graduate, netted his first Bromley goal in scintillating style today. The midfielder, aged just 18, is determined to do all that he can to help the club. Bromley volunteer Media Assistant Alex Exadactylos sat down with the midfielder ahead of the game against Torquay.

Reminiscing on his career journey, Sablier’s love of the game is evident from a young age: “When I was about six years old, I was just playing football for fun, but the more I played I enjoyed it and my love for the game just grew from there.” His first big role in helping the club came in last season’s U18 FA Youth Cup run, where the academy defeated a good Portsmouth outfit. Sablier was obviously elated with Bromley’s performances, “It was amazing to be a part of such a great achievement, not just for me, but for the team.”

The academy scene at Bromley is a thriving environment, showcasing many great talents that the club has to offer. Marcus fondly remembers his time at the academy and has a lot of gratitude for the staff members who have helped him. “It was the right choice for me to come here, as the club pushed me to achieve my targets every season’’. His promise at academy level led to him playing a key role in pre-season with the first team and even scoring his first goal against Watford U23s. “It was a very proud moment for me and my family, I was very happy to be involved with the first team. To be able to score was just amazing, I could not stop watching the goal back!’’, said Sablier.

His good performances in pre-season have now led to him starting the last couple of National League games, something to which he is very proud of and thanks the staff for putting their faith in him. Bromley’s number 24 stated: “Honestly, I am over the moon to be so involved with the first team and to do everything that I can to help the team achieve our targets. I was happy that the gaffer and management team put their trust in me to play in all my recent fixtures.”

As Bromley secured their fifth win in a row, the midfielder is excited for the future and pays tributes to his team mates for helping him also develop: “I am really pleased to be around experienced professionals who are taking me under their wing and guiding me to have the best possible career.” The sky is the limit for Sablier, who has made the club very proud.