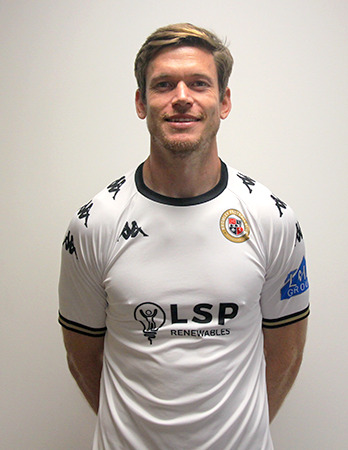 Billy Bingham, a product of Crystal Palace’s academy, began his senior career at Dagenham & Redbridge where he went on to make over 100 appearances for the club.

Bromley’s number four spent over six years with the Daggers, winning the 2009-10 League Two play-offs in the process.

Bingham also had short loan spells at Sutton United and Grays Athletic during the early stages of his time with Dagenham.

Crewe Alexandra was his next destination in 2015 before joining League One side Gillingham two years later.

The midfielder arrived at Bromley with bags of Football League experience and has certainly been a key asset to the Ravens’ squad.

Bingham helped the Ravens finish in a play-off place during the 2020-21 season before playing a key role in our FA Trophy winning squad of 2022.

Our number four has made over 100 appearances in a Bromley shirt.