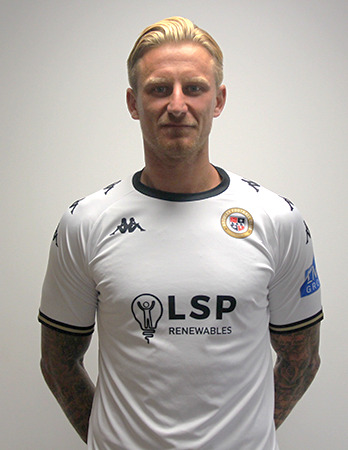 The 35-year-old centre back arrived at Hayes Lane having played for Carlisle United last season, and brought a wealth of Football League experience with him.

Born in Leeds, Webster started his career in the youth ranks of York City, where he played as a striker, and then later as a central midfielder. He earned his first professional contract with City in 2004 and remained there until 2007, where he moved on to Harrogate Town, as well as having a brief spell with Whitby Town.

Later in the same year, Webster moved to the Czech Republic and spent two seasons with FK Banik Most, making 49 appearances and scoring four times. His performances earned him a move to Doncaster Rovers in 2009. During his time at the Keepmoat Stadium, he had short stints on loan with Hereford United and Northampton Town. Following his departure, he signed for then League One side Yeovil Town, earning promotion to the Championship with the Glovers in 2013.

A season in the Championship with Town then followed, before Millwall swooped to secure his services in June 2014. He remained at The Den for five years, clocking up 138 appearances and scoring eight goals, before departing in January 2019 for Scunthorpe United. He remained with the Iron for the remainder of the 2018-19 season, before joining Carlisle United for the 2019-20 campaign.

Since arriving at Hayes Lane, Webster has taken up the captaincy role whilst playing a vital part in the Ravens’ play-off push during 2020-21 and their FA Trophy win the following season.

At the end of the last campaign, the skipper committed his future to the club by signing a new contract.