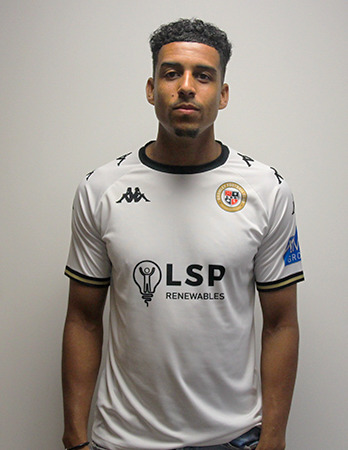 Dennis, who scored 47 times in a total of 156 appearances for Bromley between 2014-2018, started his career in the youth ranks of Watford, before making the move to Victoria Road and joining Dagenham & Redbridge. It was there where he would sign his first professional contract, going on to make 9 appearances for the then EFL League Two outfit, scoring once.

During his time with the Daggers, Dennis spent time on loan at no less than five clubs, those being Bedfont Town, Welling United, Grays Athletic, Canvey Island, as well as Hayes & Yeading United.

It was then that Dennis would arrive at Hayes Lane, signing in February 2014 following his departure from Dagenham & Redbridge. He made his debut as a second half substitute away to Dorchester Town, scoring in a 3-2 defeat. He would go on to make 14 appearances in the 2013-14 campaign, scoring four times.

The following season, that of 2014-15, is one that will live long in the memory of Bromley supporters, with the Ravens sealing the National League South title and Dennis himself playing a huge part. In his 38 appearances that season, he contributed with eight goals and played an important part in the Ravens’ title victory.

His first season in the National League saw him combine with the likes of Moses Emmanuel and Anthony Cook, in what supporters referred to as the ‘flair gang’. Though injury limited the amount Dennis played during that year, he made 24 appearances, scoring six times and assisting many more.

Dennis remained with Bromley for the 2016/17 season, as the Club began to establish themselves as a National League outfit, ending the season with seven goals in 27 matches. However, it would be the following season when Dennis would really make his name in the National League.

In what was a special season for Bromley, Dennis hit the headlines, having been converted from a winger to a striker by Neil Smith. In a season where Bromley played an extraordinary amount of fixtures due to an FA Trophy run and a number of replays, Dennis returned a prolific 22 goals in a total of 53 appearances.

Perhaps the most memorable of these, was a brace at home to Gateshead in the FA Trophy Semi-Final First Leg on 17th March 2018, where his stunning double helped Bromley not only to victory that day, but a 4-3 aggregate victory over the two legs and a place in the final at Wembley Stadium.

It was during this season that Dennis attracted the attention of a number of League One and Two sides, and eventually signed for Portsmouth following the expiry of his contract at Hayes Lane. Over a four year period, Dennis had established himself as a fans’ favourite, as well as being an entertainer, frequently scoring stunning goals.

A year at Fratton Park followed, before Dennis moved on to Leyton Orient. He would make 47 appearances at Brisbane Road, scoring five times, before Bromley manager Andy Woodman acted quickly to bring him in.