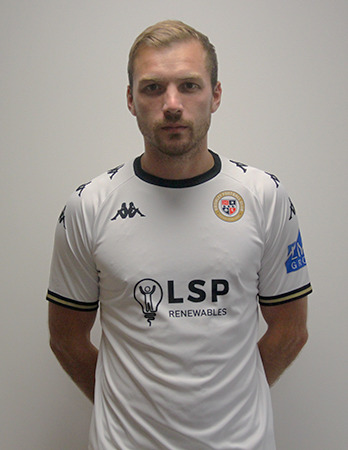 Michael Cheek scores goals wherever he goes and his time at Bromley has proved to be no different.

The 2020-21 season saw the prolific striker pick up the National League Golden Boot award, bagging 21 goals, nine more than his first campaign with the club.

Cheek first made his mark at Heybridge Swifts, before moving on to Chelmsford City. After a successful one-and-a-half season spell with the Clarets, which saw him score 35 goals in 66 appearances, he made the move to Braintree Town. Cheek remained with the Iron for two seasons, scoring 42 goals in 98 games.

His prolific spell earned him a move to fellow Essex outfit Dagenham & Redbridge, where he spent a single season, in which he scored twice in a 5-1 win over Bromley. In the Summer of 2018, Cheek signed for Ebbsfleet United and spent last season with Bromley’s Kent Rivals, scoring 16 goals.

Since arriving at Hayes Lane, Cheek has become a fans’ favourite and netted the only goal of the game in our FA Trophy final win over Wrexham at Wembley Stadium.