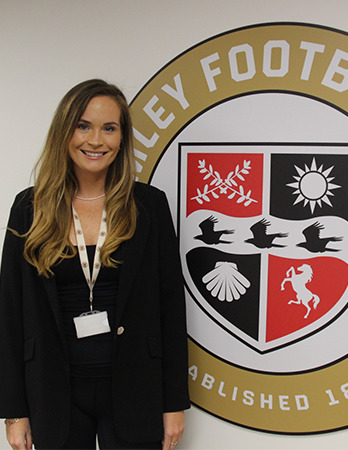 Head of Marketing and Communications

Charlotte joined Hayes Lane in March, tasked initially with marketing the launch of Broomfields Bar and Kitchen, Charlotte’s role has evolved to leading and mentoring the club’s marketing and communications department. From the development of a new website and social media strategy, to creating campaigns and initiatives such as our recent FA Trophy Season Ticket offer, Charlotte’s role is to help successfully tell the story of what is happening at Hayes Lane to supporters, stakeholders and the wider community.

Charlotte is an award-winning, Chartered Marketeer who has worked within football for the past 10 years, holding similar roles at EFL side Gillingham FC and Isthmian League outfit Margate FC. Charlotte has worked for The Football Association for the past three years as a Club Consultant, supporting clubs across the football pyramid to become high quality operations and accessible community facilities.

Alongside her role at Hayes Lane, Charlotte is a successful football broadcaster and commentator who you’ll be able to hear on BBC Final Score and 5 Live throughout the season. You may well have heard her cover a game here at Hayes Lane too! Utilising her skills as a journalist, on available match days Charlotte also hosts our Exec Club and other Bromley events.