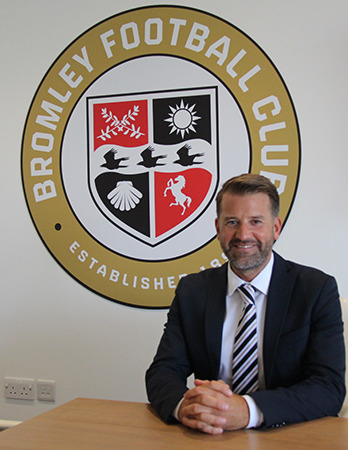 Mark originally joined the club back in 2013, when he was appointed as First Team coach and played an instrumental role in elevating the club to our first-ever season in the National League following two successful seasons reaching the 2013-14 National League play-offs and winning promotion in 2014-15.

During the 2015-16 off-season, Mark was approached by the Board of Directors to launch and build an academy at Hayes Lane. Mark seized the challenge with an astonishing sense of purpose, quickly winning the trust of the Board and staff alike.

During the 2015-16 season, Mark was appointed as Academy Director and Assistant Manager where he was influential in supporting Neil Smith’s reign, establishing the club in the National League, spanning over five years. This culminated in 260 games, 40%-win, 35% loss and 25% draw, 100% live TV win record and FA Trophy Finalists and pivotal in player and staff recruitment.

However, Mark’s main focus during this period was the development and growth of the academy player, staff and business model. Hammond has taken the Post 16-19 boys Academy from 40 players to over 300 players. Mark has built a boy’s youth development academy from u12s to u16s, established a men’s u23 development pathway programme and launched the girls and women’s strategy which sees over 60 girls represent Bromley FC at elite level.

Through his tireless efforts in pursuing the growth of the academy, Mark has established positive and successful educational partnerships with The Ravensbourne School and London South-East Colleges. All Players at post 16 level can study several qualifications such as BTEC, A-Levels and foundation degrees, whilst being full-time at the Club where they can become “professionals in football” not just professional footballers. Furthermore, the academy now boasts healthy data assessment statistics and caters for players not only in Bromley but neighbouring boroughs such as Croydon, Lewisham and Southwark. The Academy have now proudly produced an alumnus of players who have moved onto a number of national universities, careers in the world of sports science, gained full time US scholarships and most notably are now employed through the club’s apprenticeship scheme.

Since 2015-16, the staff structure has grown from four full-time staff to 21 full-time employees with a further 14 part-time staff members. Mark has designed and implemented a playing and coaching philosophy, an age-appropriate games competition programme and most recently built and collated a sports science periodisation model. As a result of this, the club have seen the development of home-grown talent either being sold to the EFL or represent our First Team squad at National League level.

In July 2022, Mark was appointed as CEO of Bromley FC.