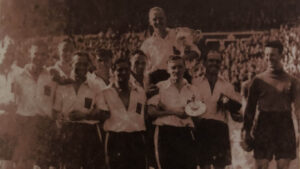 Bromley Football Club were founded in 1892 when they were playing in the South London League, and then they became founding members of the Southern League in 1894.

The Ravens play their home games at Hayes Lane, but this wasn’t always the case, the Club played at Queensmead Recreation Ground before moving to Glebe Road and then Plaistow Cricket Club, before they moved to Hayes Lane in 1938.

Bromley’s first piece of silverware came in 1896 when they were crowned London League champions shortly after becoming founding members.  They then switched to the Kent League before returning to the division.

In 1907, the Club were founder members of the Spartan League before joining the Isthmian League the following season, winning back-to-back titles.

They won the FA Amateur Cup in 1910/11, beating Bishop Auckland 1-0 in the final; they’d go on to repeat their success in this competition, as they beat Erith & Belvedere 1-0 in the 1937/38 season. During the time between both FA Amateur Cup victories, the club saw themselves win the Athenian League in 1922/23.

1948/49 was yet another successful season for The Ravens, winning the Athenian League title and the FA Amateur Cup.

They rejoined the Isthmian League in 1958, in which they finished runners-up in their first season, and winning the league in their second. They’d also go on to win the league again in 1960/61.

In the 1974/75 season, Bromley found themselves in Division One, however, they finished bottom that season. Two seasons after relegation, The Raven’s played in the FA Cup first round  for the first time in over twenty years, losing 7-0 to Swindon Town.

Bromley started their rise into the Conference Leagues in 2006/07, after yo-yoing between the Premier Division, Division One and Division Two since 1976. In 06/07, they finished runners up in the Premier Division. They went onto beat AFC Wimbledon 1-0 in the play-off semi-finals and then coming out on top against Billericay Town on penalties in the final, which saw them promoted to the Conference League South.

Bromley also visited Wembley in 2018 for the FA Trophy Final against Brackley town, which they lost 5-4 to Brackley Town on penalties after the game finished 1-1.

With the EFL firmly in their sights during the 2020-21 season, it was a play-off finish for the Ravens. However, it wasn’t to be as they fell to defeat at the hands of eventual winners, Hartlepool United.

The following season ended in silverware as Andy Woodman’s side managed to erase the heartbreak of 2018 by winning the Buildbase FA Trophy. Going into the game off the back of a tough run of results and coming up against a strong Wrexham side who were eyeing promotion through the play-offs, the Ravens went into the game as underdogs. However, it would be the BR2 side who came away victorious under the Wembley arch, thanks to a 63rd minute Michael Cheek winner.

Written by John Self and Roy Oliver

Bromley Football Club were formed in 1892 and did not enter a League or Cup competition in that inaugural season, instead playing only friendly fixtures.

The first one of these was played on 1st October 1892 against Westminster FC, and resulted in a 1-0 victory for Bromley.

The first ever competitive match was played on 14 October 1893 in an away South London League fixture against Anerley. There seems to be some confusion as to where the game was played, as one newspaper at the time stated Elmers End, and another said Norwood and, as the two communities adjoin each other, the conclusion is that it was on the boundary of both places.

However, it made little difference to Bromley as they romped home to a 5-1 victory, proving too strong for their opponents.

A feature of this match was that a ‘brake’ was ordered to transport the players from Bromley, but Bunbury choose to travel by train.  There was an accident on the London, Chatham & Dover Railway line and the train was delayed between Shortlands and Beckenham Junction. With time getting on towards kick off, Bunbury, along with a Monsieur Govian, jumped off the train and ran along the track towards Beckenham, where they hired a horse drawn cab and, changing clothes on the way, arrived at the ground just as the players were coming out to line up for the kick off.

That season Bromley went on to win the League title, and also beat Folkestone in the Kent Junior Cup Final which was played at Faversham.  Both the League and the Cup were won at the first attempt.

Written by John Self

Bromley joined the Athenian League at the end of World War I in the Summer of 1919, and remained in that competition until May 1952 when they switched to the Isthmian League.

There were much divided thoughts as to which League was best. For many people it was always the Athenian League, but for many others it was the Isthmian League. Certainly in the 1920s and 30s. But there are no real statistics to prove one way or the other, as both Leagues had their fair share of honours when Clubs were drawn against each other.

In the early 1950s the Isthmian League decided to increase their numbers and slowly poached some of the more successful Clubs from the Athenian, which eventually included: Sutton United, Tooting & Mitcham United, Hitchin Town to name a few, after Bromley and Barking had left the Athenian League in 1952.

Bromley finished their first season in the Athenian League in fifth position, and were Champions four years later in 1923 for the first time, following which – up until he commencement of hostilities of World War II – they finished anywhere between second place (which was achieved in 1936) and fourteenth position which was the lowest placings in 1933 and 1934.

After the War, they were Champions on two more occasions, in 1949 and two years later in 1951.

During their spell in this League they played 698 fixtures, of which they were victorious on 312 occasions, whilst loosing 268 games.  The other 118 matches were drawn. In the process they scored 1,602 goals, and conceded 1,478.

Five goals from Martin Ruddy, a hat trick from Scott, two each from Viles and Reece, and one from Stone made up the scorers; and three days later, Bromley won the return fixture by 7-0 in Surrey.

It was against Barking that the highest ‘away’ victory came on 29 September 1945, when Bromley won 8-0 but due to bomb damage at the Essex sides ground, the game was played at Bromley where hat tricks from Crowther and Ruddy, and a goal each from Coulson and Stone, did the damage.

Page to be updated with further sections and stories. Stay tuned…